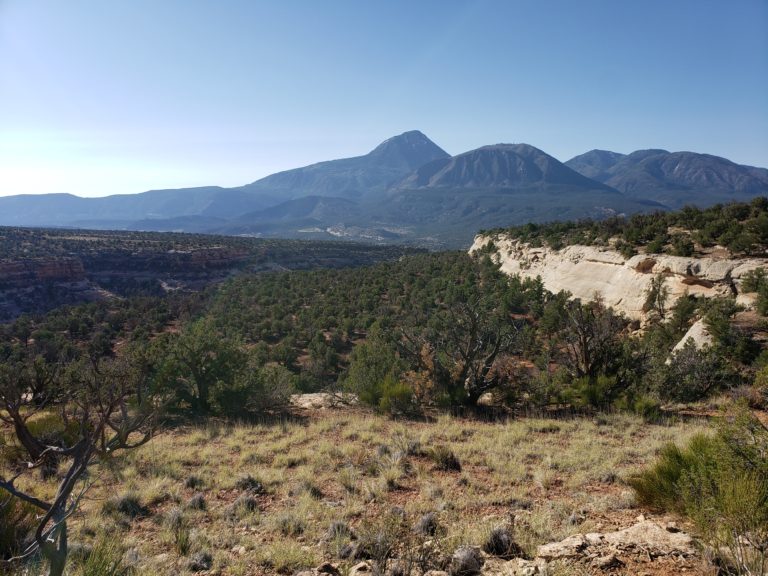 I imagine that the farmers which lived on the outskirts of the first known city, Ur, in Mesopotamia, formed a committee to oppose its development. They appeared before the first Planning and Zoning Commission and pointed out the regulation against subdivision in lots smaller than three acres. And lost. It’s been the same ever since.

Development always wins, partly because of greed, but more inevitable even than greed is that there are always more people. I moved out to the middle of nowhere here in the Four Corners back when it was still the middle of nowhere. Then, slowly at first, the houses sprouted around me like bull thistle. McMansions like to seed on the tops of hills where the ground has been disturbed by bulldozers and backhoes. There are many hills where I reside, so there fields of estate homes, large and small, began growing from the roots of their concrete foundations all around me, impervious to developer killer.

As Covid progressed, and people became more afraid, the steady pace became an onslaught, accelerating an existing trend of Texan plates and 5th wheel invasion. There are many many many people assaulting the intermountain West. So now, the trickle has created what amounts to a subdivision surrounding my house, which had previously been the only one for well over a mile in any direction. I am 5 hours from the nearest big city, and 11 miles from the nearest town. Yet it scarcely seems to matter how far out you are any more. What once was rural is now low-density development. I live on a plot of P/J forest that has become an exburb. It can no longer be considered the rangeland it once was. Everything is fenced.

I tried. I really did. But wherever we go, there, indeed, we are. And we drag our problems along with us, simply re-erecting them in the new place. I can only imagine what people who grew up out here think of this invasion, and what the Indigenous peoples who were here long before that felt when Europeans first arrived.

The puncturing of my narcissistic dream of solitude has been hard to bear. At first, I couldn’t figure out why it was so heartbreaking. I’d come to mourn the loss of space back East. In my lifetime, the sprawl seemed to metastasize even though populations dwindled in the cities themselves. I’d seen two-lane blacktop transform into four-lane superhighway in regions an hour from the city. It’d been farms just a few years before. I’d become resigned to it back there. A friend of mine who grew up out here in the Four Corners traveled East for the first time late in his life. “They wrecked the East,” he remarked. “Now they’re gonna come and wreck the West.”

I finally figured out the reason for my heartbreak and hostility toward the newcomers. Underneath my misanthropy, behind the selfish wall of my desire to keep the world and its problems at bay, beneath my complaints about the light and noise that even seeped into my dreams and inhabited the islands of my sleep, there was the loss of solitude. What I mourned was a closeness to infinity, to peace, which I experience by being so blessedly alone. Stillness and silence were the imminent and instantaneous casualties of the glowing orange streetlights that took away the night sky, the chainsaws and rifle shots that chased away both bear and silence alike at dawn. For all it takes is a single light to pierce the darkness, a sole four-wheeler to stab to death the silence of morning. Stillness and silence, it seems, are fragile estates easily chased into obscurity by the first sound of a bulldozer beep beep beeping as it backs up to help pour the new foundations for the hilltop homes they’re building next door. I mourn the loss of my relationship with the supernal. And so, beneath hostility lies grief. Under my whining about whining motors wafts a profound sense of loss.

And so, it was with some satisfaction that I drove the 40 minutes or so to a formerly isolated place called Sand Canyon just west of Cortez this Saturday morning just before the fall of fall, and discovered that its new and improved and expanded parking lots accommodated not a single other vehicle. I was the sole soul below Sol. This was how it used to be.

In Sand Canyon is maze of trails ensconced in McElmo Canyon at the foot of Sleeping Ute Mountain. Sand Canyon features cliff dwellings and P/J woodland spilling off into canyons 200 feet deep that would be spectacular if found in my home state of Illinois (which boasts not one national park yet several convicted Governors). Out here in the Colorado Plateau, Sand Canyon is a routine happening.

Excited to have the whole complex of drop offs and pour offs, of benches and shelves to myself, I set out across the slickrock waves and made a morning of mediating over the cliffs and mushroom rocks, of contemplating the sunny spires and alcoves which I’d visited many times before the installation of parking lots ensured that mountain bikers and equestrians would soon take over and ruin for the bipedal traveler the solitude of Sand Canyon. (Inhale, that was a long sentence.)

I recall sitting cliffside above McPhee Reservoir over Labor Day weekend a couple weeks ago, watching the pleasure craft pass by hundreds of feet below. A friend had invited me to a big party they were throwing a hundred miles away in New Mexico. He sent me a picture of an RV park. He’d scaled the bluffs behind the park, took a picture, and sent it with a caption: A year ago this was a hayfield. I texted one back of McPhee: A hundred years ago this was a canyon. I recalled seeing a documentary on the now drowned Glen Canyon. A woman who grew up there was crying over its loss, right there on film. There aren’t many pictures of what Glen Canyon looked before they bathtubbed it into Lake Powell. I understood her grief. It’s what I was doing over the loss of my solitude over the last summer, when Covid came crashing down to relieve us of our vacant lands.

As I’d sat there two weeks ago perched on the sandstone outcroppings high over McPhee not far from where I was now at Sand Canyon, I recall saying to eternity that I just wanted to be with It there forever, with not another soul besides me and Itself. That was how I felt along the rim of Grand Canyon before there was hardly anyone else who knew about the Rainbow Rim and wrecked that, too. You may hear many complaints in all this, but under them is earnest mourning for the loss of eternity in the banging din of time.

Now at Sand Canyon, I made my way to an overlook, on God’s finger that pointed toward the remote Navajo country to the west. Peace at last. I reflected back to that wish I’d made at McPhee to spend eternity with just me and eternity, all alone. The questions I asked back then: Was I ready? Did I even know what I was asking for? Had I done the work to ‘deserve’ it?

And then this morning as I stood alone at the edge of a bench, I thought: How much solitude can I really stand anyway?

As much as can be delivered in the present moment alone. No one can stand eternity for forever, because it’s only deliverable in the unnumbered increment of the present moment. I wanted only one other body, the body which accompanied me here, the vast one underfoot. Just then, an unfamiliar sound. A mountain biker ripped up the trail below.

When even that one other body swooshed by, eternity vanished. Solitude is so fragile and friable, like the shale beneath my boot. Awareness, when placed in the presence of one unaware, feels lost in their noise. Chased away by the hint of decibels, stillness drowned in the first distractions of a machine or a wheel. Yet was it he below who displaced my solitude? Who dispelled my peace? Or did the noise and chatter come from my own mind to dash its doves away in a flutter of sound?

Chatter was my reaction, my own rejoinder, to the injection of change around me. The prattle and rant didn’t come from a mountain biker or the clack of hooves between which fell the endless horseshit on the trail. The noise came from me.

It was then that I realized solitude as an inner condition not created by or dependent upon the externals which surround me. The dis-ease emanated from within, not from them. It’s easy – and lazy – to rely upon the world to create the initial conditions for inner quietude. Yet I must generate them for myself, from myself, and guard that peace zealously with my awareness of now. All the heat and clatter and light in the world is my opportunity to go within and practice silence and stillness within myself. For I am that vast country which surrounds me.

So, the answers to those questions I’d asked above: I wasn’t ready for solitude because I thought it came from outside, not from within. And so, I didn’t know what I really asked for, since I thought it was an external gift which surrounded me at the whim of circumstance, rather than an inner condition chosen and cultivated by myself. The whole journey of spirit for me is one from exteriors to interiors, which always emanate from within and are enforced by an inner solace, not the lack of an outer one. Had I done the work? I think that one’s irrelevant. My birthright, and the birthright of us all, is that there is no ‘deserve.’ There’s no work I can do to merit or to earn peace. I either choose it or I don’t.

It was the choice to love the mountain biker who tore up the trail below. It was the decision to embrace all the horseshit from the equestrians who’d discovered Sand Canyon and were now skunking those same sand bottoms with green gruel.

And so, when I arrived back at the trailhead, and surveyed the parking lots now crammed with cars, I realized that this whole landscape, what it represented, was within. I could either choose it inside, or blame the outside for not giving it to me. My whole life is that choice.