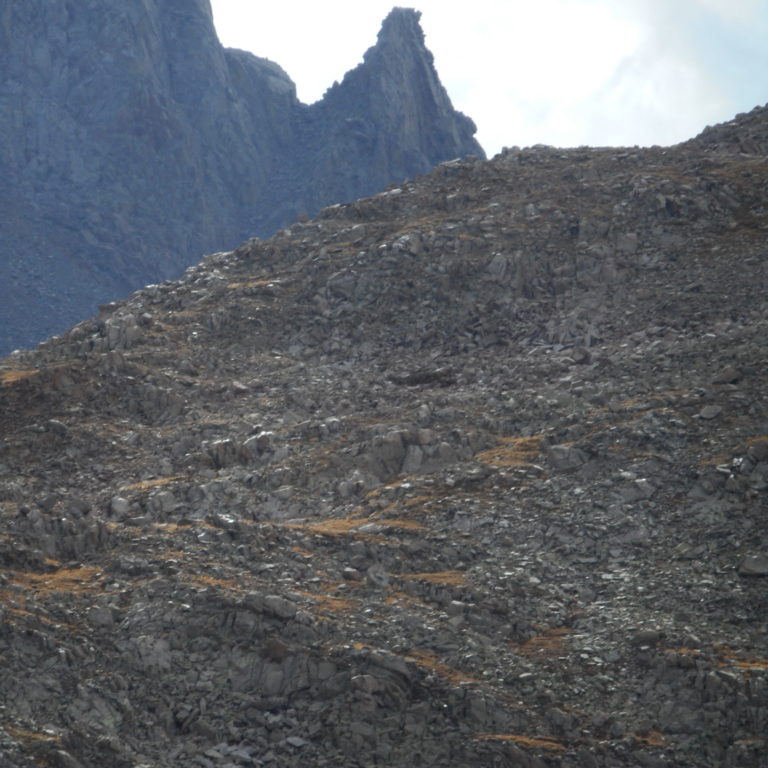 I had hiked mountains in England’s Lake District a couple years before, and again yesterday.  Today I decided to get adventurous.  I took a ferry from the resort town of  Windemere across the eponymous lake, largest in England, to the tea-cozy village of Ambleside with its farms hemmed in by dry stone walls.  Then I hopped a bus into the middle of nowhere.  The emerald-gunmetal mountains of England are diminutive even by Appalachian standards, but they rise sharply and are very craggy, so they can be dangerous.

I hiked down into some bogs and then decided to go off the trail and into the mountains.  Something inside, call it the Inner Sherpa, warned me against climbing mountains off clearly marked trails.  But I was young and inexperienced in hiking and never paid much attention to my inner voice back then. Reminded me too much of my spelling teacher in 5th grade.  So I strove up the side of a rocky face.  Occasionally I’d glimpse down.  It’s amazing how small everything looks from a couple thousand feet.  The mountains didn’t tower all that big from the road.  Yet the roadside inn and ruby buses trammeling the highway in silence seemed like the tiny Matchbox toys I collected when I’d been a boy.

I walked up the scree, the ice-chewed remnants of boulders, in a bright, cold sun.  The day before, I’d sometimes lose my step in the talus and slide down a few feet in seconds, the equivalent to rock surfing.  The English adventurist loves scree, and makes a point of sliding down on purpose.  But I only did it by mistake, which is what my hike soon turned into.

I was about three-quarters of the way to the summit, and I ran out of route.  Hadn’t seen a soul all day.  I’d been scrambling, so I was on my own, stranded a couple thousand feet from the road.  Above me stretched an unscalable cheek of pocked rock.  Below me, a slide of scree that terminated in a sheer cliff.  It was only a few hundred feet from the precipice to the next landing below it.  Like I said, this isn’t the Andes here.  But whether it’s a few hundred feet or a few thousand, dead’s dead, and there ain’t no degrees of death.  It’s all the same temperature.

So I was stuck, backing up the face of the cliff on my buttocks.  What the hell was I gonna do, spend a cold night on the mountain?  I panicked.

I scanned above me.  I saw a few handholds and footholds I hadn’t seen before.  Without thinking about it, I raced up the side, covering dozens of feet in what seemed like moments.  I didn’t think or plan.  It was instinctive.  I just did it.  Then, panting, I ran out of places to put my hands and feet.  I was marooned again.  It was too damn steep to go down.  Now I knew how cats got treed.  For me, it’s just always been easier to go up than to come back down.  I whimpered a little.

After I ran through all the hopeless scenarios in my mind (freezing to death and having my mummified remains found by gorgeous archaeologists in 10,000 years; falling down the scree and being found by gorgeous first responders next spring; being eaten alive by crows and being autopsied by a not-so-gorgeous Yorkshire coroner with Stinking Bishop cheese on his breath), I peered up again.  There, there was more opportunity.  I saw things I couldn’t see before the desperation set in.  I was willing to try things I wouldn’t have dreamed before the despair.  They say God stands for Gift Of Desperation, and that’s what God was right then.  I ran up a few dozen more feet of that rocky face without giving myself time to think about it.  Then I ran out of room again.

It occurred to me: This was how I lived my life.  Long periods of being stuck, mired in what seemed like hopelessness, helplessness, a life without options.  But then in fitful strides, I would make mammoth progress.   The late evolutionary biologist, Stephen Jay Gould, believed that life evolved in fits and starts which he called punctuated equilibrium.  Life progressed like that, and so did I. And it was always having my back up against the unclimbable peaks that forced me to see possibilities I couldn’t or wouldn’t see when I was in my comfort zone, then the courage to try those options.

Courage and creativity weren’t so much voluntary pursuits as the children of desperation.  And I took my boldest steps, made the greatest progress, when I didn’t think about what I was doing.  Life is quite simple, until we start thinking about it.  I couldn’t allow myself to be afraid in those times of exigency, or the fear paralyzed me.  It was always just the fear that stopped me.  Never anyone or anything else.

Screw all that!  This time I was really stuck.  Above me, there was nothing but sheer cliff.  Only that river of scree stretched beside me, above and below.  And riding that meant a ride over the pour off. I cried a little.  And then I prayed.  The answer I received to my prayer was the first of the same kind of help I would later receive again and again on my journeys throughout the wild places.  The answer came in the form of a boy, no more than eight or nine.  At first, I could their voices.  Then, the first boy appeared from behind a boulder below.  Then his older brother, about 12.  Then their father.

They weren’t scaling the rock wall like I was.  They were walking up the rockslide like it was a staircase.  They just pointed the toes of their boots into the gravel for support, and waltzed right on up.  They saw me, and seemed surprised by my surprise.  In that moment, all of my fear, all of my panic and desperation, left me.  I knew I’d be alright.  Because they were there.  Their presence comforted me, like family.

As they climbed on past and nodded their helloes, it was their example that propelled my spirit up the side of that mountain.  If they could do it, I could do it.

In a few moments, I glided to the summit of that mountain. I thanked the man and his sons.  “You have no idea how much time you just saved me,” I told them.  They just smiled and moved on.

Shafts of light streamed from crevices in the clouds, blazing the mountaintop.  Barren peaks stretched in all directions and the wind was at my back.  In the distance, I could even make out the twinklings of the Irish Sea.  I had conquered the mountain.  I was a mountain man!  And then two little old Scottish ladies walked right up to the top without having broken a sweat.

I’d learned so much in such a short time.  I learned then the prudence of trusting my instincts.  There’d been that feeling when I started out that I shouldn’t wander too far from the path or undertake to climb something I knew not how.  But where would I be if I’d listened to that voice?  I wouldn’t have learned the lessons the mountain taught me.

Consider that the way you do your laundry is the way you do your marriage; that how you play table tennis is how you play birth and death; that there are no small things in life; that it’s not what you do, but how you do what you do.  And so, the way I showed up in those moment on the mountains is the manner in which I comport myself in all events, big and small.  To understand this is to know that there is no big and there is no small.  Every speed bump is a mountain, and each Everest only an ant hill.