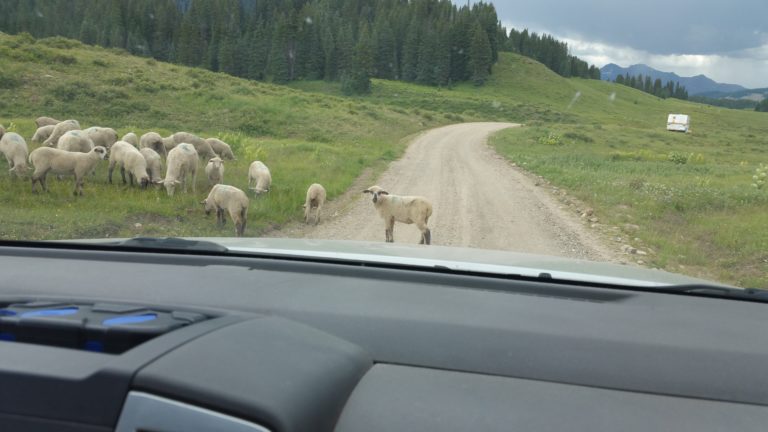 Off the westbound lane of highway 160, smack dab on the La Plata-Montezuma County line at the summit of a grade locally called Mancos Hill, you can turn right into National Forest.  Just take Madden Peak Road.

If you’re in a pint-sized Toyota Yaris with about an inch of clearance and those skinny little tires, you won’t get very far before the gnarly road forces you to pull over, get out, and hike through the aspen.

The southernmost – and one of the lowest – of the La Plata Mountains in southwest CO, Madden Peak offers panoramas of the Navajo ranges that cross the New Mexico-Arizona line.  The old mine road parallels the railroad grade just below, and they both follow the south slope as it bows in from the valley. It gave me the feeling of having my back up against this mountain, cupped in a bowl of forest.

I chose writing when I was in 7th grade, I believe.  10 years of unmentionable behavior postponed that career.  But writing chooses you, really.  So, when I was ready to holster the joint and several ways of my self-destruction, I drew that instrument which is mightier than the sword: my keyboard.  Writing remains today a grueling trek up the mountain, a lonely, usually empty pursuit and WITH LITTLE REWARD SAVE FOR THE FLEETING FEELING ONE ACQUIRES AFTER A GOOD DAY OF WORK.  HEAR ME, THERE, LORD?

And work it is, despite what your friends may think, because they don’t really understand you, right?  They don’t know that, like a pint of Jack, it may be open the door to a world of consequences, yet it’s impossible to put down.  Writing remains an addiction I sorely wish I could detox out of my system with one of them colon cleansers like Writer’s Plumber, then maybe go to some meetings of Writers Anonymous.  I know I waste a life, foregoing relationships and success in favor of…what?  Relationships with characters no one…reads? You see how hard I’m trying to avoid writing in upper case again.  This writing stuff takes great self-restraint, I tell you.

Desperation dogged me as I trudged up that mountain road.  I asked God for guidance.  I even prayed to my grandfather last night.  Only desperation would force a prayer on an ancestor.  I’d hit bottom again. You see, I couldn’t stop writing.  Writer’s block was not the problem.  In fact, I needed the writer’s form of cottage cheese. I seemed to have taken too much Writer’s Plumber and couldn’t stop going on and on.  I needed Imodium. I required a binding agent.

I required a writer’s agent to help me market my work. I lacked the ambition to market the collection of short stories I did manage to get to market (non-subsidy, I might add).  I think a writer’s greatest enemy is his or her own discouragement.  Faith, usually in short supply, had run dry.

As I hiked on up that mountain, I must confess, I thought about dying.  Maybe that would be good.  But not by a bear, God.  No, not that.  Constantly afraid of bears when I wandered in the high country (ursophobia?), I prayed God that if I were to die up here, let it be by a fast stroke of lightning, not the long, slow mauling of a bear with dull and dirty claws from too much rooting.

Yes, God, a quick end would be okay with me.  There, I said it.  I asked God for a specific thing, something spiritual mentors and books I read had trained me not to do.

Well, since I was asking—

Please God, I folded my palms, let there be a beautiful, young female to keep my company along this road before I die.

I asked for that because whenever even one other human was ever even within a half-mile within my radius way up here in bear country, all my terror drained down some inner sewer.  My bearanoia would vanish.  I wanted this angel to appear hiking along the road and then we’d hike up the mountain together.  We’d tell each other our life stories and then hook arms and step in rhythm as she rested her head on my shoulder and I smiled, dangling a walking stick from my wise hand.

A white Jeep kicked up some dust as it passed by, driven by a bald guy with gray hair.

And help me to get published and at least sell a decent amount of books.

‘Decent’ meant a few thousand copies.  I went on, praying for a sign.  Should I hike on up  the road?  All I really wanted was one big clearing, big enough so that the aspens wouldn’t block my view of the Carrizo and the Chuska Mountains stacked atop the back of Sleeping Ute Mountain. I just wanted a clear vista of the Shiprock monolith hovering in the sky like the rock with wings that it was. I would’ve settled for and settled in a clearing where I could perch on a rock and meditate and write down what came to mind.  A clearing devoid of bears, for when the forests closed in dark and the understory of oak scrub came so thick that my eyes couldn’t penetrate it, that’s where the bear fear twitched acute, and every blacked bole became the mighty black boar of a bear.

Path Up the Mountain.  That was a therapeutic metaphor from the Acceptance and Commitment Therapy I sometimes used with my clients (don’t tell me clients about this quick finish thing).

The Path Up the Mountain metaphor goes like this: because we’re human, we sometimes lose faith in the prospect that our life’s journey, likened to a difficult mountain trail, actually leads somewhere.  The metaphor goes on to describe a separate me who looks at the me who trudges up a mountain trail.  This observer self-spies me from the summit of a nearby peak and sees my whole path up the mountain, all at once.  Quite the voyeur, the observer uses binoculars, I’d imagine.  He sees that, though stretches of the path lead down and switch back and forth, though at times my path seems to go nowhere, the trail does eventually rise to the summit.

I happened on a small herd of cows near a stock pond.  No bulls.  They backed off warily, never taking those bright, bovine eyes off me.  I soon saw why:  they protected a couple calves.  I spoke gentle words and kept my arms out, approached slowly, making a slow semi-circle around them so they wouldn’t spook, blessing them in a Gandhi wave.  After all, they’d dispelled my fear of the bear just by being there.  Cattle feared the mighty Ursus amongusalmost as much as I did.

I’d prayed for a beautiful female of mating age I’d meet along the trail, and I got a whole herd of them.  My prayer did not specify the species.  This Higher Power must be like a Google search – maddeningly literal.  Well, at least the cows were of mating age. I rejected the cattle as dating opportunities and continued on up the mountain.  My fear returned.

I crossed a cattle guard and the road narrowed to a single set of tire ruts.  The sky darkened over peaks hidden by the thick aspen cover.  The woods rustled.  Something sprang.  I froze.  But bears didn’t shout Gotcha!

A boy shooting a Nerf rifle at his little brother did.  A man and his two boys tent-camped just off the road.  Again, all the fear flew off.  It reminded me of a time, stranded on a steep mountainside in the Lake District of England, I prayed for assistance and in moments, two little boys and their father came trudging up the scree, which gave me the courage to make it the rest of the way up that mountain.

The campers gave me the guts to go on.  A short distance after I’d passed their campsite, the aspen forest I’d hiked through all afternoon opened up into a sprawling meadow.  Madden Peak and the southernmost of the La Plata range soared skyward in full view over my shoulder.  To the south, the Four Corners stretched vast and broken into the ranges I’d wanted to see.

I’d prayed just for this.  I’d reached a destination, found my endpoint, just not quite in the way I’d imagined.  The fear, gone.  The despair, vanished.

When the path seems to lead nowhere, when I hear no reply to my words or to the prayers that frame them, when I feel abandoned and almost turn back, spurred by a temptation to lose courage, in those times I need to remember that the trail does lead somewhere, that it’s not all for nothing, that my answer may lie just around the next bend in the road.

I found my bench in the clearing – a dead trunk, and started writing.  20 minutes later, clouds coalesced overhead.  Thunder thrummed.  Time to head back down.

I recalled asking God for my death preference – to be murdered by a quick, painless bolt instead of by a herd of bears.  Given that God seemed to be listening today, I decided, as the rain struck my shoulders, to run as if I my bloody life depended on it.  I was at least an hour away from my car.

Rain pelted and thunder exploded around me.  Another sound behind – a fast-moving truck – barreled down the mountain like an avalanche.  The truck’s brakes squealed and it halted on a steep slope.  The driver poked his head out and offered me a ride.  The driver’s name was Chris.

Was Chris a beautiful woman?  Nope.  Chris was a grungy, young drifter listening to classic rock.  I hopped in.  You don’t return the Lord’s coincidence back to Her.  Chris told me his story over the groan of the truck in low gear: he staked out gold pan claims for a company.  We bumped down the road as the rain battered the bug juice off his windshield.  Turns out Chris came from my hometown, Chicago.

He told how he and his crew got charged by a yearling bear yesterday and how Chris’s friend almost had to use his 45 on the male.  At the last minute, the bear ran off.

“Stick to the road,” he told me.  “The cattle keep away the bears.”

He dropped me off and I slid back in my Yaris and drove toward the highway just as the sky let loose its second quiver of arrows.

You always get just what you need. In (wait for it) …