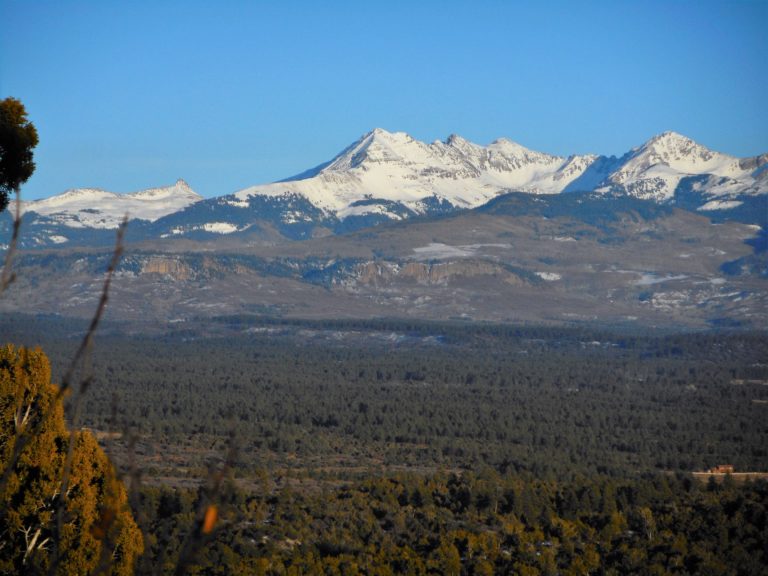 It’d been a depressing start to the day. More bad news on the virus, on riots, on another type of depression we were all going through, only they spelled this one with a capital ‘D.’ I’d spoke via phone with my normally ebullient mother back in Chicago, but she was depressed, too. Everybody seemed to be. So many reasons to be.

I got out of my house near Summit Lake, in southwest Colorado, just to clear my head. There were strong winds and bright sky, with unseasonably cool temperatures. I wanted that wind to squeeze through my right ear and out through my left to blow out some of that sawdust.

It felt like a fall day, even though we were nearing the first day of summer. Brought my weed cutter and wacked some thistle along the way. I took out some of my anger turned inward out along the way. I left the scythe leaning against a fence post and set off through some ponderosa forest. It connected up with some BLM land that lead eventually to summit Lake. The pondy groves swayed in the relentless wind, and soon, I’d left all those weeds behind. I mounted the ditch and berm for Summit, a reservoir pretty familiar to me. My plan was to walk the berm down until I ran into other walkers, in which case I didn’t know what I’d do, virus and all.

Didn’t take long and I did encounter another someone. I decided to head down toward the water’s edge below the berm. I was scouting the lake for my cousin and her family, who were due to come down from Carbondale. They were looking for some places to paddleboard. The spring melt had come down from the mountains, but the back basin of the lake was already emptying out in favor of the sedge and water plants that came as soon as the water retreated. I treaded across the newly green flats, making my way across the dried mud to the east shore, a place of forests I’d only explored once in winter.

I crossed over the drying lobe and entered tall stands of oak brush which began just the other side of the water’s edge, just beyond the cottonwoods with their huge, exposed roots that clamped like dinosaur limbs to the leaf littered shores. They gave way to the drier story in the low hills just above them. The water loving species surrendered quickly to the ponderosa. I walked beneath their limbs, which roared in the gusts until I reached an oval meadow with a lone juniper in its middle, surrounded by an isle of Gambel oak like some atoll amongst the grass.

My bearanoia came back out of nowhere. It comes and goes unexpectedly. The tall stands of oak rustling in the sunny gales brought back in my memory the words of outfitters and native Coloradoans’ that the bears just love the tall oak and you can often scare one up there. I even imagined I heard a bear growling on the far side of the meadow.

Should I cross the lea, where I might find a final view of the La Platas before they lost the last of their snow in their crags and cirques in this drought? I thought upon it for a moment, and then stepped out from the edge of the paddock to confront once again my irrational bearful fear and wade through that last stand of oak and see a new view of the La Plata Mountains from there.

I’d been having these strange experiences lately. Who knows? Maybe it was spending all this time alone without interacting with another human. But I’d leave the house for the post office or the for an errand in town, and when I returned home, everything seemed alien, like it did when I’d come back home after a long trip. Or I’d see the ponderosa stand to the southwest of my porch and it was like I’d never seen them before. I’d been reading Landscapes of the Sacred by Belden Lane, and he wrote about how it’s the eyes that see something anew, in collaboration with the land itself. It’s the imagination that co-creates the sacredness of a space along the with landscape itself.

What you’ll notice is that by now, that depression had all drained away like the bottom lobe of the lake, or perhaps the wind just vacuumed it off along with the cobwebs in my gourd. I made it across the field of grass without any bear tackles. I treaded up the shallow knoll to – as the bear did when it crossed over the mountain – see what I could see.

At the top of that shallow hummock, it was like I’d never even seen the La Platas until just now. I had a vision of them with new eyes, for the very first time. A score of houses smattered on the east shore of the lake spread out in the new grass beneath Fremont groves. I’d seen these homes a thousand times from across the lake, or when I drove the highway to Mancos to get my mail. Usually, the encroaching development bothered me, but now I overlooked it. The homes were even beautiful in their own way, and from my hilltop I could pretend to spy into the distant attic windows and imagine dusty antiques and chests in the dusty, swirling air. Yet it was mountains which called for my attention. Seen from a new angle, from a new place. The summit snow fresh in a hanging valley mile away, framed at bottom by ridges of ponderosa and oak and P-J that rolled endlessly southeast, while the taller ponderosa seemed like a tall carpet atop the foothills mile after mile until they were broken by the cliffs and canyons that surrounded the mountains on all sides.

I’d been practicing having an open heart and an open mind. How do you do that? If you would’ve asked me when I was 20, it would’ve involved some cannabis and a Jethro Tull ballad. Yet now, I realize that all I have to do is imagine that my heart and mind are open. To envision that I am open like the limbs of a great pinion open to the cloud-powdered sky and the ceaseless wind.

I’d been practicing gratitude. Just trying not to take credit for anything in my life. Now, as I stood on the ridge of that oak terraced hillock, I felt like I glimpsed everything that I’d seen a many times before for the very first time. Like I was being born in each instant. It’s so hard to do that, in each moment to have a new skin. I can’t keep that up for every long. To see everything as fresh.

I am 58 and I felt for the very first time that I loved God. In my better moments, I knew for some time lately that God loved me. Yet now I knew that I loved God. Gratitude flowed from me outward like tears and out from the world like rain inward. The highway a mike beyond with its silent traffic. The red barn on Ute tribal land like it a Currier and Ives print, with the fields of bison beyond it green, semi-tawny due to drought.

These moments, we all know, do not extend much beyond their fewness. And it is unknown whether, even in an afterlife, they subsist. If there is a heaven, then most likely they do, for heaven would be conceived in this. Yet on this earth, my humanness tries to capture the humility that makes possible the experience of this love. My mind intrudes and tries to perpetuate the moment and extend it into eternity. It uses memory of the last instant in this instant to try and extend the purity, and as soon as recollection floods in, then time does, too. And the clarity is lost. The present diffuses back into time and the brilliance and innocence die into a reproduction, a model in my mind. I can’t help it. It’s part of being human to take a futile stab at recreating these instants of guilelessness, which transforms that innocence into time.

Yet their echoes often remain for a while. On the way back down, I frightened off skeins of mallards and Canada geese despite my trying to avoid the expending of their energy due to my path. The lake seemed so much more expansive from this side. The fresh scent of pine and cool water and cottonwood and the vanilla bark of the ponderosa. The gray till of the water whipped up by the wind. A small siege of blue herons flapped up from the drowning shore.

Meandering through the tall stalks of milkweed, over the gargantuan roots of the cottonwoods near shore, the waft of the willows and the forbs. I zigzagged up again through the oak and then the ponderosa just a few feet from the sway of the willows just onshore.

To know that you love something just by practicing gratitude, just by imagining that your heart is open. It takes a lifetime for that moment to be born. My great moments blowing in on the tailfeathers of my saddest ones.

To be born in each moment with eyes that see the instant as fresh, the skin new and green. How long it takes for that one single moment to alight upon a lifetime. How rare it keeps itself from our eyes. It takes place in the eyes that see, co-making the wildland along with the green and blue and windy and white substrate that we’re each given in each moment to make with what we will.

That dance of the present. It’s always now.