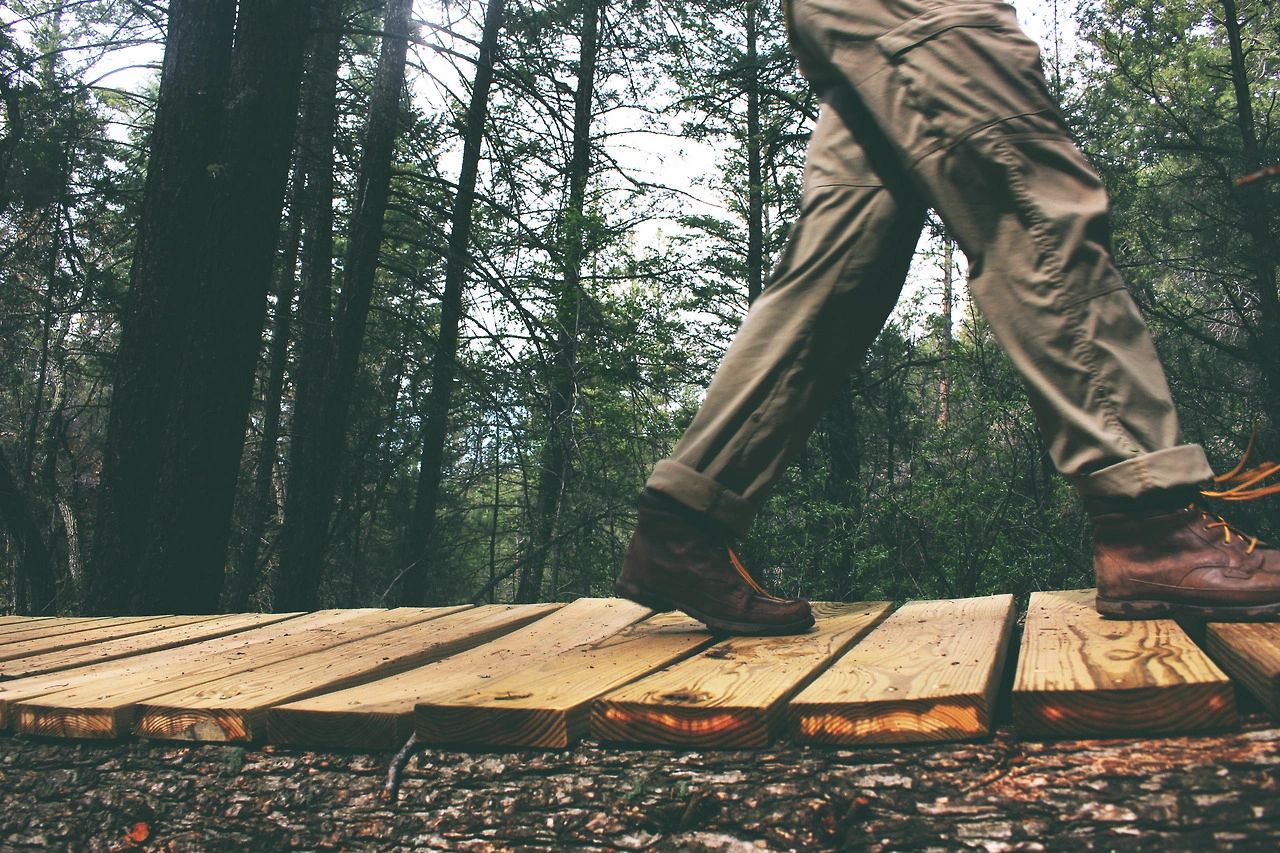 A new story from The Hero’s Journey for The Daily ZU – read the full story at www.thedailyzu.com

I went out for a hike with my good friend, Ben. Before the lockdown, we’d go out every Sunday up Horse Gulch or down the Animas River or even just stroll through Durango, addressing and solving the problems of the world. Today’s hike was a little more significant for me. I was sticking my toe in the water after several months of absence from the water. I was hiking, sans mask, up in the mountains with another person.

As Ben and I slogged up Madden Peak Road in the mid-90’s heat, we talked about everything from politics and Jung to women and music and the dangers of celebrity. Ben is a rocker, a professional musician whose trio and sometime duo, The Ben Gibson Band, is starting to get gigs again now that there’s a gentle reopening down here in drought-stricken southwest Colorado.

The road was surprisingly deserted on our way up; just a few campers in the open spots along the sides of the road and a few SUV’s making their way up or down through the tall oak and aspen forests that lined the sides of the winding road. Our constant companions were the lowing cattle that browsed the forests and hung out around mudded stock ponds beneath the quakies whose leaves flickered like silver dollars in the incessant breezes that came down the mountain.

As we ascended what amounted to my geological backyard, it was hard for me to resist my untreated know-it-all-ism and tell Ben the names of all the mountains and mesas which came into view all around us.

Our panorama was mostly to the south, though at times the vista opened to the west, and we had clear views of the small town of Mancos tucked in between Menefee and Weber Mountains in the Mancos Valley, and beyond it we could see the jutting fortress of Mesa Verde. Stacked over that escarpment toward the horizon, the profile of Sleeping Ute Mountain loomed, with the sugarloaf summit composing the jaw of the warrior god, his head turned eternally west. And as we rose even higher, the peaks of the Navajo Nation sprawled gently into the powder blue sky.

As we pushed into the steep terrain and the road trended east, the southern and southeastern horizons unpeeled into a sky waxed with blurry cumulus clouds white and guileless coming up from New Mexico and Arizona. There’d been fires up here just a few weeks ago, though the spotters and slurry bombers had done their work, and the evac orders had been lifted. The fires had been contained by our local heroes, the firefighters and other first responders. They’d rescued a bear. The pictures showed the white tape on the cub’s paws. They’d reintroduce it into the wild.

Though the fires had relented, a cruel drought hung on. Beyond the ridges that paralleled highway 160 far below us, ranches and farms spread, interrupted by mesas and hogbacks that merged in the distance with Navajoland. Once in a while, we’d be able to catch a glimpse of Haycamp and Stoner Mesas, and between them, the La Sal Mountains far into Utah.

“That bump just south of the Blues. See that? That’s the Bear’s Ears,” I pointed and babbled, relapsing on omniscience.

I pointed out the Abajo Mountains about 70 miles west, and traced my finger north to south, describing wiggle by wiggle the topography of the horizon as I went, and then pointed it out the Bear’s Ears again.

“I been up there,” he said as he squinted west.

To put names on things. For me, it’s like one drink to an alcoholic. I couldn’t stop myself:

“See that there,” said I, pointing to the castellated spine of the Chuskas, due south, a dissected plateau which straddled the AZ-NM line. “Those are the Chuskas, the watershed for the Navajo Nation. That fire on the rez that burned something like 10,000 acres? Was that down there?”

“And next to it the Carrizo Mountains,” I gazed out at the soft camelback to the northwest of the Chuskas.

He didn’t seem all that interested. Mesas 30, 40 miles away punched up out of the southern horizon. Ben wanted to know which way was south, and I pointed, and then pulled out my phone and its compass app. I corrected myself. My south was actually southwest.

To the southeast, as far as we could see in the hazy heat, another range broke the horizon, a soft hump far into New Mexico. Maybe the Nacimiento Mountains near Cuba, though I soon realized they’d be too far over the skyline to poke up this far northwest. But we could see into forever from here.

The forests around us cleared. We stood on a ridge. The treeless peaks of the La Platas soared over us. Ben chose this meadow as our stopping point. By now, we’d just about solved the world’s problems and healed the nation’s divisions with our talks, sometimes in agreement, sometimes in debate. Ben had a right to his own opinions, no matter how misguided they were.

We loitered in a clearing just off the road, and I took a pee.

“A couple mountain bikers just passed by,” he said from behind after I’d zipped back up.

“Really? You think they saw me?”

“There wasn’t anything to see,” he said, and we laughed.

I looked out at the unending south. And I had a thought. “Eternity—”

“—Just a second,” he said, smiling distantly. “I just wanna enjoy my joke.”

We laughed again. It had been a good one.

Then, as we got quiet, and I peered out at the patchwork of harvested, gold hayfields and green pastures that checkered the rolling land beyond the last of the foothills of the La Platas, I said to him:

“Sometimes I think that if I didn’t have a house and a cat and things and responsibilities, I could spend eternity out here, just as the wind.”

He didn’t say anything, I thought about that some more, how vast this land must have been to the indigenous tribes, the Utes and the Navajo, who crossed it on foot before Europeanization. And even how big it must’ve seemed to the ranchers who traversed it on horses after them. And how it still gave us a taste of eternity, even as we chugged its distances on rails. Ben had camped near here a few weeks ago. He’d seen evidence of the tracks that had been laid and then picked up as if by some giant years ago. The railroad had run through Mancos, turning it from a goldrush town to the sleepy town it remains today, peopled with organic growers and young families seeking a slower pace and simpler way. The old opera house is a memory of those earlier, faster times.

I waded into a knee-high stand of Mountain Mahogany, slaking my lonely thirst on the sun and sky. I longed for the infinite, to be wrapped in the eternal, yet I always was enfolded and enrapt in its endless center, in the middle of something so boundless it had no center. I stood still far from the mountaintop toward which we’d treaded, the peaks too high for us to summit. I took in the endless sky and roll of land and the clouds that filtered the light too bright to look at directly. The horizon too far to cover on foot in a day, for the meaning of horizon is an infinite regress, which along the earth’s globe has no beginning and no end, and so it always recedes before us. We can never get to the horizon. And still I wish for the infinite, for the eternal.

Yet maybe this is all the infinity I can stand. The unmediated, raw eternal would shatter me, because I haven’t been broken enough times to hold it in my cup for even a single moment. I need to be split and remolded, again and again, before I’m strong enough to become a vessel for the supernal, to handle its heat and brilliance. To become mindless to hold that which thinks no thought.

I said some of that to Ben, that I could only handle eternity in pieces like this endless sky here before us. I wasn’t ready for paradise. He chuckled as he sat there under an aspen and took it all in.

We were quiet again for a while. Then we walked back down the mountain, the trek downhill always easier than the way up. The journey from birth to death like a walk up a mountain road. The first half winding and sweating and huffing and puffing. The descent less effortful but in inevitable, perpetual decline. And none of it mattered, we concluded. It didn’t count more if we’d been Johnny Depp or Michael Jordan this go-round. Just being ourselves was enough.

That’s what a few hours on the shoulder of a mountain can teach you. That, and a good friend.